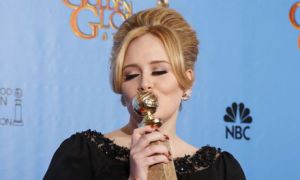 Adele’s critically acclaimed sophomore album ‘21′ has reached yet another momentous milestone this week, reaching one million sales in Australia.

This massive achievement makes ‘21′ the first album to sell one million copies in Australia since the release of Delta Goodrem’s ‘Innocent Eyes’ in 2003.

This landmark achievement falls just days before the second anniversary of the release of ‘21‘ on 21st January.  Additionally it falls in the same week as Adele’s victory at the Golden Globes, where her theme song to the new James Bond movie Skyfall won the award for Best Original Song.  Skyfall has now sold over three million copies worldwide.

‘21‘ has achieved global success with 26 million albums sold worldwide.  In her native UK, ’21’ has sold an incredible 4.5 million copies.

The ‘Adele Live At Royal Albert Hall’ DVD has sold over three million copies worldwide.  In the USA it is the first music DVD since 2005 to sell one million copies in a single year and in Australia it has sold 100,000 copies.

Adele 21 is out now via XL Recordings/Remote Control.